Using Blood and Plunder Rules, we pitted four vessels in a Pirate raid. Unfortunately most of my photos were lost. Here is just a few.

A Dutch merchant Fluyt was attempting to reach safe harbor (to the right) when she was set upon by first two, then a third Pirate Sloop. After only two rounds, a newcomer to the game firing his very first cannon salvo, brought down the Dutchmen's main mast! The light breeze is blowing offshore from the bottom of photo and the downed mast will drag the ship towards the shore and its breakers! The loss of the mast will slow the merchant from 12" to 6", virtually assuring the pirate's success! 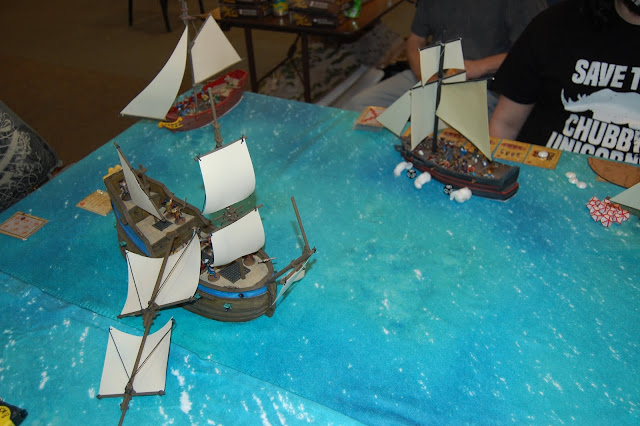 Later, a second Sloop is swinging around the Fluyt's stern, while the first Pirate Sloop fires off a second volley, further damaging the rigging. The Dutchmen on the main deck have at least cut away the mast wreckage, but it is barely making headway... 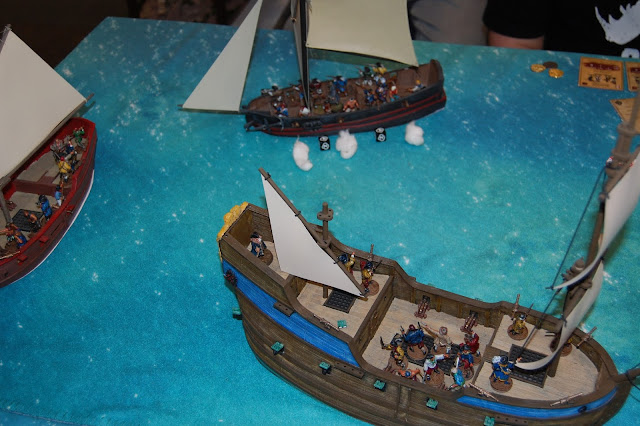 The third and final Pirate Sloop moves to cut off the Fluyt from its destination, and its volley brings down the foremast, so the Dutchmen loses all headway. Eventually the second Sloop will grapple the merchant and swing aboard, but one of the terrified crewmen of the merchant sets off the powder in the hold, blowing up the ship! (taking down four French pirates who only just missed halting the trail of burning powder! Turned out to be a fun little game. 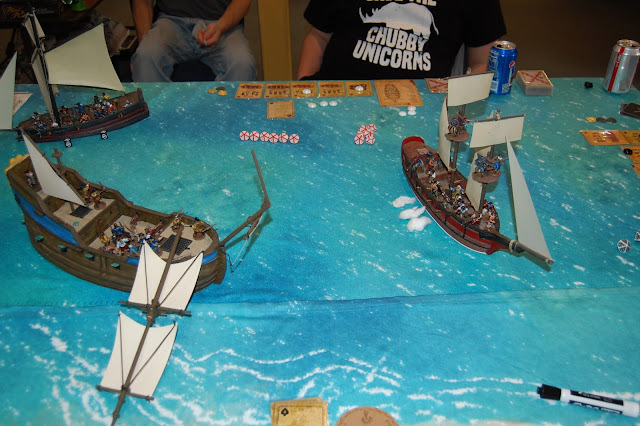 Posted by MacGregor at 3:53 PM

MacGregor
I'm a retired History teacher of 34 years from Colorado. I've been gaming since I purchased my first figures way back in 1975, almost prehistoric I know. I have over the years expanded my collection to cover many different periods (I LOVE history) to the tune of some 70,000! A lot of painting I know. Now with my eleventh year of retirement, I get to devote as much time as I want to my passion. I have become part of a club that meets weekly at a local hobby store where we share in our common interest of gaming with minatures.